Dagger haven’t kept any secrets about making a new boat, the idea of making a new modern Axiom has come at a time when paddling slicey boats on harder grade rivers has not only become cool, but almost the norm. Within the last couple of years we have seen new designs pop up from most kayak manufacturers across the globe, and while the Axiom is still selling very well, in my opinion its about time Dagger caught up and produced a boat that is not only fun, but a little more manageable on bigger rapids. So saying that here in the UK we have the first glimpse of the prototype, highly talked about, Dagger Rewind!

Immediately after getting my hands on this weapon I realised the Rewind could potentially be the boat that takes the crown for best current slicey boat. Yes its a huge statement and I know there will be a big argument between friends and lots of heated discussion about what is the best, but at the end of the day its all going to come down to personal opinion, preference or company ties. To give you an idea of what to expect, here are some answers to questions that I have been bombarded with!

What makes the Rewind different to the Axiom?

The new boat is a tiny bit longer, this has been done across the entire length making it easier to keep momentum. Dagger have added more width to the tail increasing general stability and control under when popping sick tailies. The nose has increased in volume and rocker allowing the boat to resurface quicker keeping you high and dry when it matters. Giving it more front end volume has made it easier for taller or larger feet paddlers to fit comfortably. Where as the Axiom is a little front heavy, the slight change in hull design on the Rewind has created the perfect nose to tail balance making it feel great on the water and a dream to carry. The lower rails are a little softer and there is a more pronounced edge at the front end making it incredibly manageable, easy to control and silky smooth.

How does it compare to the Pyranha Ripper?

The biggest difference is the rocker position, although it doesn’t sound like much the boats feel completely different. The ripper is really long, it feels like most of the length has comes from the tail which allows it to be fast, especially on easier grade water. While that length makes tailies super stable and very easy to put it where you want it, the award winning Pyranha does lack that exciting playful element you find with the Axiom or Rewind. Where as you may not win any flat water races in the Rewind you will find yourself smiling from ear to ear. But like I’ve previously said, this is my opinion and you will have to try it yourself!

What does it cost?

Good question, and one that no one in Britain can currently answer. The reason for that comes down to many factors. The first one is whether Dagger think it fees able and allow the mould to come to the UK or not. The price tag in America is $1,259 USD however if it is to imported from the states then I can imagine it will add an extra whack on top, then that depends how far as a country we can manage to wedge ourselves inside Trump from behind. Then there is the small matter of Brexit.

However, for me, I believe the kayaking community across Europe needs this boat to be made here no matter the huge cost that it may bring. Kayaking is an ever growing and hugely popular sport and to have competition between these companies who are making kayaks at the top of their game is only going to progress the product designs further benefiting paddlers across the world.

Which size is for me?

Dagger will be releasing 3 different sizes, small, medium and a large. Ive had the medium this week and I am 87kg and 6’4”. I find the medium absolutely fine but I cant comment for the other sizes just yet as I haven’t come across them. I can imagine if you are around 70kg ish or less you might opt for the small, If your are over 95kg ish you might opt for the larger boat. For other specs here is the link: https://www.dagger.com/us/kayaks/rewind-md

Mushrooms! I hate mushrooms, cant stand them and think they ruin food. Although on a serious note, believe the hype, this is possibly the best boat I’ve paddled for making me smile in multiple environments. Spending hours with the nose twirling around in the sky on eddy lines, throwing more kick flips than I can count, surfing waves until my arms fell off and sending so many of the biggest boofs its began to hurt. This boat does is all, and does it very well with a smooth and stylish nature. Unfortunately this one is only a prototype and I’ll be gutted when I give it back at the end of the week! Actually anything I don’t like? Yeah, I don’t like not having my own yet! So there you have it the only thing left to do is go try one for yourself! 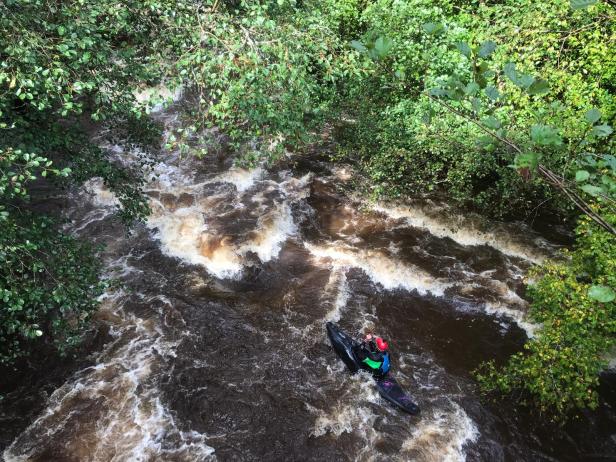